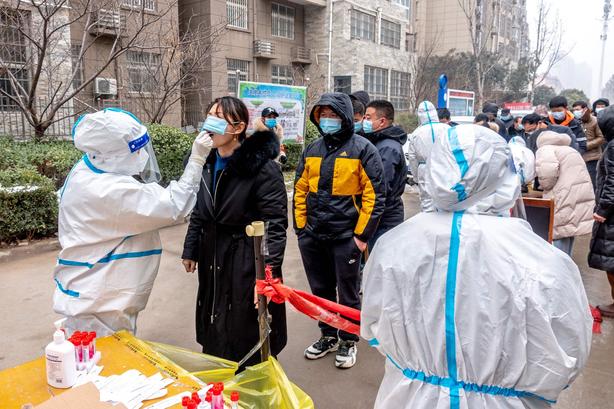 Temperatures below zero in the early morning of Beijing. It is not yet dawn when several buses begin to arrive at Tiananmen Square with more than a hundred athletes who will participate in the Winter Olympics. Before entering the closed isolation circuit where they will live during the competitions, a flag-raising ceremony awaits them in Tiananmen. Then they must take the oath that they will do their best to represent their country.

While the athletes coldly await the beginning of the ceremony, a couple of blocks away the queue to enter an elementary school turns around a small street in the center. There are three hours left until the start of classes. Enough time to set up an improvised mass testing center in the courtyard where more than 1,000 residents of the neighborhood will pass quickly.

One week before the start of the Games and with a small outbreak that has left 46 positives since mid-January in a city where more than 21 million people live, the authorities of the capital are calling many houses asking residents to go to get a PCR test.

"This is the second time in three days that they have summoned me to do a test. They say that there has been no contagion nearby, that it is only for prevention," says Liu, a twenty-something resident of the Dongcheng district. The young woman also explains that on Sunday she received a call from the health authorities to ask her if the medicines she bought the day before at a pharmacy were hers because she had a fever. By scanning the QR code of the health application when she entered the establishment and when paying with her mobile, her data was registered.

"I told them that I had bought some painkillers for my boyfriend because his head hurt so much. After that, the neighborhood committee came to our house to ask us to go get a quick coronavirus test," Liu recalls. In some pharmacies they have limited the sale of medicines to reduce fever and the authorities have asked everyone who has bought these medicines in the last two weeks to have a PCR done for fear that they have involuntarily hidden a positive for Covid.

The Chinese newspaper Global Times also rescues the case of a Beijing resident who bought antidiarrheal medicine for her dog over the weekend. On Monday, she woke up with her mobile health code yellow (mandatory to get a PCR) and her company asked her to show the negative result of the test before returning to work.

This January, small outbreaks of the delta and omicron variants have continued to be active in China in several provinces. Meanwhile, local governments continue to take strict measures to contain the spread as the Lunar New Year holidays and the opening of the Olympic Games approach. They are also encouraging the population to go to the vaccination centers to get the third booster dose.

In the Asian country, more than 1,210 million Chinese already have the complete schedule of the vaccine. That represents almost 90% of the population, most of them have the inactivated vaccines developed by pharmaceutical companies Sinopharm and Sinovac, with much lower efficacy than mRNA injections.

China was in the lead in the global vaccine race for much of last year. It also sent billions of doses abroad (President Xi Jinping promised in November to send 1 billion doses of Chinese serum to African countries) in the midst of a campaign that has helped many developing countries and boosted China's international influence. Beijing. But with the advent of omicron, several studies have been presented suggesting that the immunity provided by Chinese vaccines declines rapidly.

A study published Dec. 22 by researchers in Shanghai showed a "significant reduction" in the efficacy of a Sinopharm booster injection. Another study from Hong Kong found that three doses of Sinovac's serum were not enough to protect against omicron infection.

Late last year, China's Ministry of Science and Science approved trials of a domestic mRNA vaccine as a booster shot for adults. The vaccine, ARCoVax, which was jointly developed by Walvax Biotechnology, Suzhou Abogen Biosciences and the Academy of Military Medical Sciences, has already been used in clinical trials in Mexico and Indonesia, although its results have not yet been published.

Sinopharm and Sinovac say they are working to create vaccines using mRNA technology. And the Chinese company CanSino said in December that it is also developing a new inhalable vaccine that will provide protection against omicron and is almost as effective as its mRNA counterparts.

Anhui Zhifei, one of the Asian country's vaccine developers, announced a few weeks ago that his laboratories had carried out a small test that showed that his new serum could trigger antibodies against the omicron variant. Neutralizing antibodies were detected in samples from 78% of the 32 subjects who had completed an inoculation course of three injections one month earlier. But the level of antibodies showed an approximate three-fold drop compared to that seen against the original coronavirus. , says the statement from the pharmaceutical company.

Since the first major coronavirus outbreaks began to be reported in the city of Wuhan in January 2020, China has reported 106,000 cases and 4,636 deaths. Those are the official figures in a country that has spent two years without giving up its zero Covid strategy. Wu Zunyou, chief epidemiologist at the Center for Disease Control and Prevention, estimates that if China had taken a more flexible approach to fighting the pandemic than in the West, it would have had more than three million deaths and 260 million positive cases. .

According to the criteria of

The Trust ProjectLearn moreHealthFrom the alpha to omicron variant: this is how virus mutations spread across the planetHealthGalicia, a region with the best vaccination parameters in SpainHealthThis is how the sixth wave is experienced inside a hospital
where are the largest data centers in the world