How much does the audiovisual sector represent in the Spanish GDP? • Audiovisual production 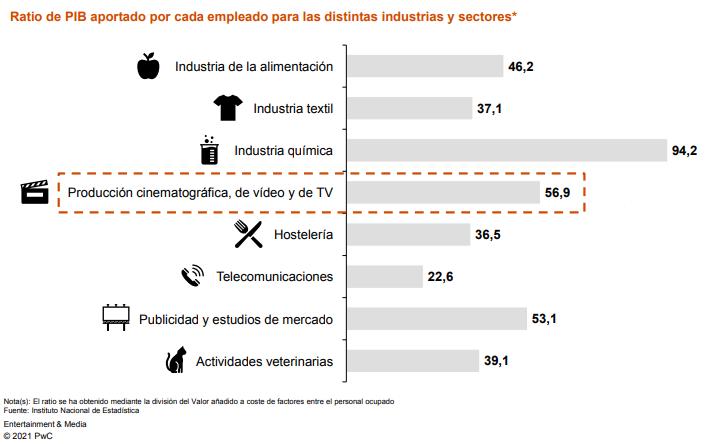 How much does the audiovisual sector represent in the Spanish GDP? • Audiovisual production

According to the "Report on the opportunities of audiovisual content" prepared by the consulting firm PWC and the association of production companies PATE, the audiovisual sector represents 28.3% of the total cultural industries, and these in turn account for 2.4 % of Spanish GDP.

In other words, the audiovisual sector represents 0.69% of the national gross domestic producer thanks to the 8,323 million euros it contributes to the economy, being the main cultural activity with more than 72,000 professionals and 6,700 companies.

And despite the criticism it often receives from a certain sector of politics, film, video and television production is an industry of great value and in Spain each employee in the sector contributes 56.9 euros to the Spanish GDP, a higher value figure than that provided by workers in other industries such as the food, textile or telecommunications sectors.

According to the report, fiction production is one of the pillars of the Spanish audiovisual sector, with an estimated impact of between 820 and 860 million euros in contribution to GDP, more than 19,000 jobs generated and between 260 and 280 million euros in revenue taxes at the national and local levels.

Contribution to GDP of intellectual property

However, in the current contracting models of the OTTs with the production companies, the platforms demand the intellectual property of the contents, which is why a situation of imbalance is taking place and a migration of the economic flow from Spain to other countries such as the United States .

For this reason, as in other international businesses, proper regulation by national and European bodies is important to correct this imbalance.

What is digital cinema and video production?