Internationalize the SME: when the market is the platforms 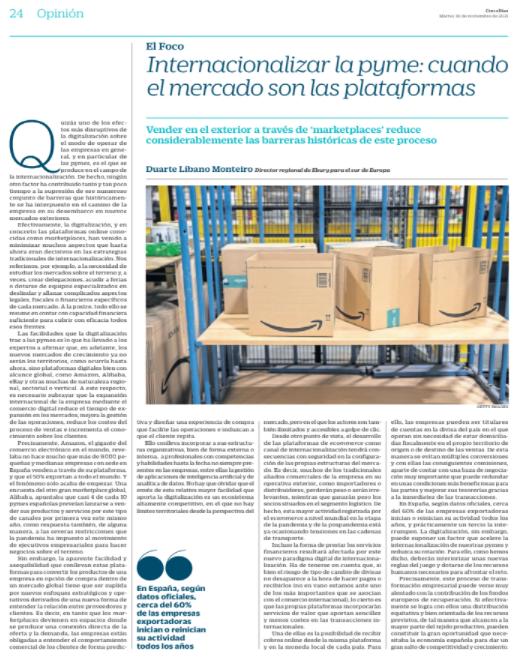 Internationalize the SME: when the market is the platforms

Perhaps one of the most disruptive effects of digitization on the way companies operate in general, and SMEs in particular, is that which occurs in the field of internationalization. In fact, no other factor has contributed so much and in such a short time to the removal of that numerous set of barriers that have historically stood in the way of the company in its landing in new foreign markets.

Indeed, digitization, and specifically the online platforms known as marketplaces, have come to minimize many aspects that until now were decisive in traditional internationalization strategies. We refer, for example, to the need to study the markets on the ground and, sometimes, create delegations, attend fairs or equip themselves with teams specialized in defining and smoothing out complicated legal, fiscal or financial aspects specific to each market. In the end, all of this boils down to having sufficient financial capacity to effectively cover all these fronts.

The facilities that digitalization brings to SMEs is what has led experts to affirm that, from now on, the new growth markets will no longer be the territories, as was the case until now, but rather digital platforms with a global reach, such as Amazon , Alibaba, eBay and many others of a regional, sectoral or vertical nature. In this regard, it is necessary to underline that the international expansion of the company through digital commerce reduces the time of expansion in the markets, improves the management of operations, reduces the costs of the sales process and increases knowledge about customers.

Precisely, Amazon, the giant of electronic commerce in the world, revealed not long ago that more than 9,000 small and medium-sized companies based in Spain sell through its platform, and that 50% export to the whole world. And the phenomenon has only just begun. A survey of the other great global marketplace, Alibaba, pointed out that almost 4 out of 10 Spanish SMEs planned to start selling their products and services through this type of channel for the first time this year, also in response, in some way, to the severe restrictions that the pandemic has placed on the movement of business executives to do business on the ground.

However, the apparent ease and affordability that these platforms entail to convert a company's products into a purchase option within a global market has to be replaced by new strategic and operational approaches derived from a new way of understanding the relationship between suppliers and customers. In other words, while marketplaces become spaces where there is a direct connection between supply and demand, companies are obliged to understand the commercial behavior of customers in a predictive way and design a shopping experience that facilitates operations and induce the customer to repeat.

This entails incorporating into their organizational structures, either externally or internally, professionals with skills and abilities to date not always present in companies, including the management of artificial intelligence and data analytics applications. We must not forget that the opposite of this relative greater ease provided by digitization is a highly competitive ecosystem, in which there are no territorial limits from the perspective of the market, but in which the actors are also unlimited and accessible at the click of a button. .

From another point of view, the development of e-commerce platforms as an internationalization channel will surely have consequences in the configuration of the market structures themselves. In other words, many of the company's traditional commercial allies in its foreign operations, such as importers or distributors, will lose weight or become irrelevant, while partners located in the logistics segment will gain weight. In fact, this increased activity recorded by e-commerce worldwide in the pandemic and post-pandemic stage is already causing tensions in transport chains.

Even the way of providing financial services will be affected by this new digital paradigm of internationalization. It must be taken into account that, although the currency exchange rate risk does not disappear when making payments or receiving them (it is not in vain that we are facing one of the most important risks associated with international trade), the truth is that the platforms themselves will incorporate value services that provide simplicity and lower costs in international transactions.

One of them is the possibility of receiving payments online from the same platform and in the local currency of each country. To do this, companies can hold accounts in the currency of the country in which they operate without having to be domiciled for tax purposes in the territory of origin or destination of the sales. In this way, multiple conversions are avoided and with them the consequent commissions, apart from having a very important negotiating asset that can result in more beneficial conditions for the parties and improve their treasury thanks to the immediacy of the transactions.

In Spain, according to official data, about 60% of exporting companies start or restart their activity every year, and practically a third interrupt it. Digitization, however, can be a factor that speeds up the internationalization of our SMEs and reduces their turnover. To do this, as we have said, they must internalize new rules of the game and equip themselves with the necessary human resources to face the challenge.

Precisely, this process of business transformation can be greatly encouraged with the contribution of the European recovery funds. If an equitable and well-oriented distribution of the planned resources is effectively achieved with them, in such a way that they reach the majority of the productive fabric, they can constitute the great opportunity that the Spanish economy needed to make a great leap in competitiveness and growth.

how to sell digital products on ebay